We’ve been working on a streamlining of the Energy System that’s used in Jump Temp and Skree and Thrum. Currently the players all roll from their dice pool and add up all the dice. Unfortunately that’s a little math intensive. Not that people can’t do it, just that it could become tiring.

Our current thought is you pick your highest roll and all the other dice rolled add a +1.

But when we were play testing we talked about an optional possibility that a player could bring in the full value of more dice but at a cost. At first we talked about depleting that die but it didn’t feel right. It also nearly killed both characters each time that happened due to an escalation where both kept depleting dice to be ahead of the other character.

I recently had a different thought though that sounds cool to me but I don’t know how to implement yet. Instead of depleting a die when bringing in more dice, the player is “raising the stakes.” Basically putting themselves in a worse and worse position to achieve a goal.

I’m not quite sure how to do that yet. My first thought is that the other player can put a condition on the character. How to structure that condition is the question. I’m thinking that the condition is treated like any other challenge but also akin to an agent that adds a die to the roll.

The character with the condition can attack it directly to deplete it or just endure it until it depletes. 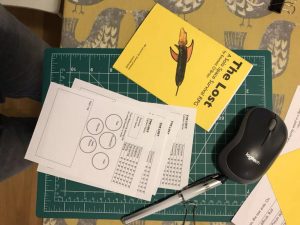 David Johnston did a nice A6 layout for The Lost, my solo space survival RPG. It looks very nice when printed out in booklet form. I like it better than the original layout I did. David also drew a quick picture for the front which he said I should replace, but I don’t know, I kind of like it. It has a Buck Rodgers feel that’s raw and fun.

The Lost solo RPG A6