I turned back for a moment as we rode away from the floating blight. The blue white glowing and billowing  forms pulsed slowly as the sun descended in the orange red sky. We would never again see the blight as a sanctuary.

We rode as fast as our track sleds would carry us. We entered the burnt forest, what was once a deep green and cool sanctuary of life, was long ago scorched and charred by the solar storms. Every ten years, our sun sends out a belch of burning plasma that sears the planet. It was the first weapon that the invaders used against us. It destroyed all the great cities of man, all his great works. These things were before my time but I’ve seen the pictures.

Our only sanctuary is underground. Our city was built in an spent salt mine. It had been converted to a science facility full of seed banks and data storage. So when the first solar storm destroyed the world above, great minds were preserved below. They slowly rebuilt, developed the Blades to defend against the Skree, and repopulated.

But we’ve grown too large for our salt mine. The hope was to get a new colony in place before the next storm. They have not been successful. Our mission to report on the progress of the colony will be a troublesome report.

The charred and twisted trunks of the ancient forest give some protection from the Skree. As fast as they are, they don’t seem to be able to maneuver well. We opened our throttles all the way and traveled single file, launching over hills and stumps.

We scanned the terrain diligently for anything out of place. A Thrum disguises itself, sometimes as a large rock, sometimes as a stream of water but often as a tree. If we’re lucky, the Thrum will get it’s disguise wrong.

We weren’t lucky. From all around, the sound of a great drum sounded. The sound grew greater and greater in a rolling tone that could be felt in the chest and head. Rapidly, it grew louder than any other sound.

Up ahead, one of the burnt trees split opened and peeled it’s outer husk away. Inside, glowing purple and pink, thin unimaginably strong filaments poured out. We turned to scatter away from it.

“Blades! Blades!” I tried to call out, but I couldn’t even hear myself screaming the command. I fired off my first blade at the filaments. The chemical laser swept over them, burning through some.

Dreseco, overwhelmed by the rolling drumming collapsed off his sled. The filaments immediately found him and started dragging him in, peeling first away his armor and then his flesh.

I watched the horror unfold in seconds. I fired my second Blade and struck the armor still in the clutches of the filaments. The shape charge detonated and damaged the filaments and prevented Dreseco’s body being desecrated any more by destroying it in the blast.

I have never seen a Thrum thrash around so violently. I couldn’t be sure but I think that I deprived it of it’s prize. The filaments thrashed out in all directions.

The sled suddenly grew lighter, as I looked back, I saw Feneshi being lifted away from the back of my sled and torn apart.

I cried out his name and almost turned back. I wanted to avenge him, to do something but no, there is nothing that a man can do to a Thrum.

We sped a way, regrouped and continued on. There was no time for tears. 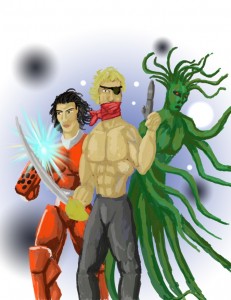